How to Diagnose and Treat Acromegaly 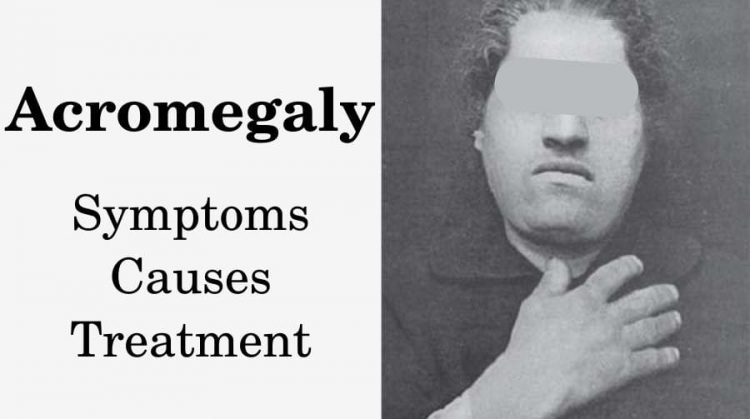 That’s why conditions that lead to hypersecretion or deficiency of HGH can have dramatic consequences on your homeostasis (body’s ability to regulate hormones, body temperature, fluid balance, etc.) and may even increase your risk of premature death.

Furthermore, your quality of life will be impaired by debilitating complaints, which depending on the condition, may include chronic pain, blindness, arthritis, bone loss, chronic fatigue, obesity, muscle weakness, and sexual dysfunction.

A timely diagnosis and treatment can help prevent the crippling symptoms of these conditions and ensure normal life expectancy.

What is acromegaly and how common is it?

Acromegaly is a disorder that develops in adults due to excessive growth hormone levels. The excess of HGH in children leads to a different condition, called gigantism.

Studies reveal that 55-70% of the cases are women while men are affected slightly less often. The researchers also report that most men are diagnosed around the age of 45, while women are 50 years old on average at the time of diagnosis.

The most distinctive clinical features of the condition are the facial and skeletal changes, and the enlargement of the nose, lips, and tongue. HGH stimulates bone thickness, leading to wider feet, hands, and fingers. The bones of the skull also thicken, which leads to the brows and lower jaw jutting out.

These features are not reversible, so early treatment can help avoid their development. Yet, the condition itself cannot be prevented.

What is the life expectancy of someone with acromegaly?

Starting early treatment can also help prevent the long-term complications of acromegaly, which may lead to premature death, such as type 2 diabetes and heart disease. Without treatment, patients with acromegaly have an average reduction in life expectancy of around 10 years.

The main distinction between gigantism and acromegaly is the time at which HGH hypersecretion develops. If hypersecretion occurs before the end of puberty, it leads to gigantism.

Since the growth plates are still open during puberty, gigantism leads to excessive growth in height. Those affected achieve a final height that is well above the average for adults.

Most of the symptoms of the two conditions overlap, but patients with gigantism also complain of muscle weakness, insomnia, delayed puberty, and deafness.

Furthermore, gigantism is extremely rare. Studies suggest that by the end of the last century, there were only 100 officially reported cases.

Researchers report that the most common age at which symptoms occur is 13 years. If gigantism occurs towards the end of puberty, similarities between the two conditions are more common.

What do they have in common?

The similarities between gigantism and acromegaly include hypertension, enlarged nose, lips and tongue, ticker bones, and diabetes. Like acromegaly, patients with gigantism can have normal life expectancies if they receive proper and timely treatment.

If left untreated, individuals with gigantism usually have a shorter life expectancy since the condition’s onset is at a much younger age.

What causes hypersecretion of growth hormone?

More than 95% of cases of HGH hypersecretion are caused by hormone-secreting tumors which develop inside the pituitary gland. 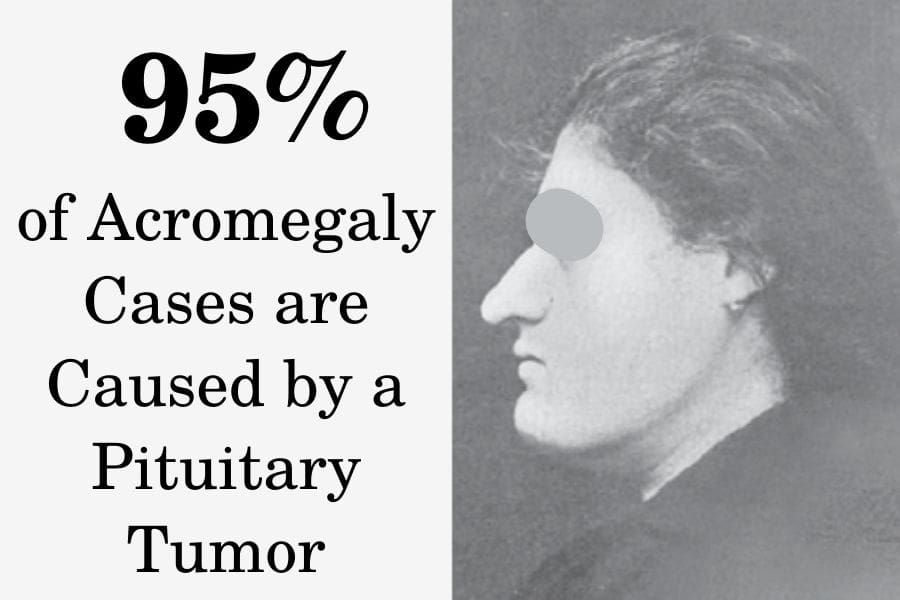 These so-called adenomas produce growth hormone uncontrollably, which leads to the development of acromegaly or gigantism. Much more rarely, the excess of growth hormone is caused by hormone-producing extra pituitary tumors.

The cause of these tumors is currently unknown, but scientists suggest that specific genes may increase the risk of their development. Since these genes can be inherited, acromegaly can also present as a familial disease.

Long-term abuse of medications that contain exogenous HGH can also lead to symptoms of acromegaly. Individuals who use HGH injections as steroids usually attempt to improve their athletic performance or achieve a desired physique. To do so, they take extreme doses of HGH, which far exceed the physiological references.

On the other hand, legal HGH therapy can help restore the normal growth hormone levels in patients with deficiency and successfully alleviate their symptoms without any risk of acromegaly.

What are the symptoms of acromegaly?

The most common signs of acromegaly include:

The patients may also complain of:

Patients with acromegaly may experience pain due to water retention, such as headaches, joint and muscle pain. In addition, headaches may also occur due to the growth of the pituitary adenoma and increased intracranial pressure.

A pituitary adenoma can also compress the optic nerves, which leads to partial or complete loss of peripheral vision.

How are the symptoms of acromegaly different from other conditions?

Acromegaly symptoms shouldn’t be confused with other conditions that cause similar complaints such as Marfan syndrome and Pachydermoperiostosis.

Pachydermoperiostosis, aka Hypertrophic osteoarthropathy (HOA), is associated with changes in the fingers, facial changes due to thickening of the skin, hyperhidrosis, and proliferating bone tissue, which leads to increased bone thickness and arthropathies.

Both of these conditions have a slow progression, similar to acromegaly. Yet, they are genetic in nature and their symptoms appear much earlier – usually during childhood or adolescence. While acromegaly always affects adults and the first signs typically appear at middle age.

For example, sleep apnea in acromegaly develops due to the increased thickness of the tongue, pharynx, and upper airways.

Since growth hormone works against the action of insulin, hypersecretion of HGH can cause insulin resistance.

If your insulin resistance reaches a certain threshold, your pancreas may reach a limit at which it cannot produce higher levels of insulin. This leads to elevated blood sugar levels and the development of type 2 diabetes.

If left untreated, hyperglycemia in type 2 diabetes can lead to even more severe complications such as polyneuropathy, kidney and heart problems, reduced vision, and non-healing wounds that may require amputations.

On the other hand, the increased water retention leads to edemas of the soft tissues, including the synovial tissues in the wrist, which compresses the median nerve and causes carpal tunnel syndrome.

Acromegaly can also lead to debilitating arthritis due to the effect of the growth hormone on bone and cartilage tissue. Excess secretion of growth hormone causes cartilage hypertrophy and the formation of osteophytes (bone spurs), leading to the destruction of the joint.

Once arthritis occurs, the joint problems will likely persist even after initiating successful therapy for acromegaly.

The blood volume also increases due to increased water retention, which leads to the development of hypertension. About a third of all patients with acromegaly suffer from hypertension, and the diastolic blood pressure is usually elevated more than the systolic value.

Studies report that acromegaly is also associated with the so-called acromegalic cardiomyopathy, which occurs due to the hypertrophy of the heart muscle. When combined with increased blood pressure and type 2 diabetes, patients with acromegaly are at a significantly increased risk of premature death due to cardiovascular disease.

How is acromegaly diagnosed?

According to official guidelines, IGF-1 measurement is the first and most recommended test for the diagnosis of acromegaly.

If your IGF-1 levels indicate that you may have acromegaly, then your doctor will assign you an additional test to confirm the diagnosis, that’s called the oral glucose tolerance test (OGTT).

During OGTT, you will have to ingest a drink containing 75 g of glucose and the physician will measure your GH levels afterward.

IGF-1 should be performed in all patients suspected of acromegaly, including those who present without the typical complaints but have several of the most common accompanying conditions such as type 2 diabetes, cardiomyopathy, sleep apnea, arthritis, etc.

Since a pituitary adenoma is the most common cause, your doctor will assign you Magnetic Resonance Imaging (MRI) to confirm and precisely locate the tumor. MRI is a safe procedure and does not involve radiation.

When is acromegaly usually diagnosed in adults?

Most patients with acromegaly are usually diagnosed around their 50s, which is often a few years after the onset of the actual condition.

Studies report a 5.5-year diagnostic delay on average, and only a third of all patients are diagnosed without any delay.

This delay occurs due to the difficulties in diagnosing acromegaly. Acromegaly is a rare disease that develops insidiously over time, and it often takes a while before patients are referred to the correct medical specialist, such as an experienced endocrinologist.

How to cure acromegaly 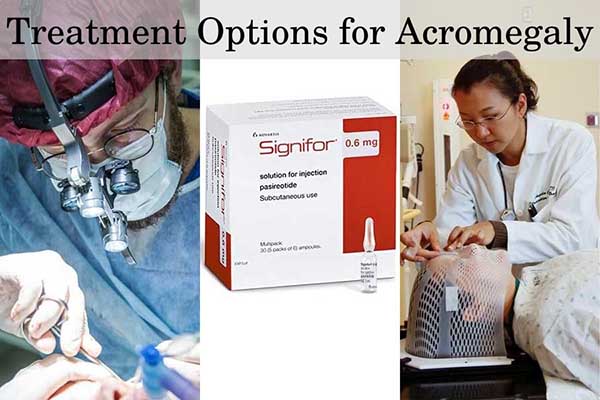 There are 3 main options for treating acromegaly:

Only surgery can cure acromegaly completely, and you won’t have to take medications for the rest of your life.

Therefore, surgery is the most effective method for treating the condition if the tumor can be removed entirely. Your GH levels will return to normal immediately after the surgery.

Surgery may also involve incomplete removal of the tumor. In this case, acromegaly is not cured, but the procedure improves the subsequent response to medications for controlling GH levels.

Incomplete resection happens when the tumor is too large to be removed entirely, or other difficulties complicate the procedure.

A surgical procedure also carries certain risks, such as damaging the healthy parts of your pituitary gland and causing hypopituitarism, leakage of cerebrospinal fluid, and increased risk of infection (meningitis).

If the tumor can’t be eradicated completely, medication therapy is the second most effective method for lowering your GH levels.

Some medications, such as pasireotide, can also help shrink the tumor, which may help increase the chances of a successful second surgery. They work by mimicking somatostatin – a hormone that naturally suppresses HGH release.

What are the side effects of treatment for acromegaly?

Unfortunately, the medications are not free of side effects. Common adverse reactions include headache, hair loss, weight gain, gastrointestinal distress, and muscle weakness.

Radiation therapy can also permanently decrease your GH levels, but it doesn’t have an instant effect. Instead, your GH levels will drop slowly over several years, and you will still have to take medications for acromegaly in the meantime.

Furthermore, the radiation will inevitably damage the healthy parts of your pituitary gland, and you will likely develop hypopituitarism instead. Therefore, you will have to take hormone replacement therapy such as HGH injection.

Due to its proximity to the pituitary gland, the optic nerve can also be affected by radiation in some cases.

Even if the treatment does not cure acromegaly completely, it will help normalize your growth hormone levels, stop the progression of your symptoms and prevent complications.

Your doctor will assign you regular examinations to help them access your hormonal levels, pituitary function, and the potential need for changes in your treatment.

Are all symptoms of acromegaly reversible?

The treatment can help reverse most of the symptoms of acromegaly. For example, skin thickness, sweating, and most facial features such as the enlarged nose and lips usually return to normal.

Unfortunately, symptoms that affect the bones, the joints, and the heart are hardly reversible. This includes enlarged hands, feet, jaw, and arthritis. Studies also report that treatment may stop the progression but will not reverse heart problems such as acromegalic cardiomyopathy.

All these symptoms and associated conditions can be successfully prevented by initiating treatment for acromegaly in time.